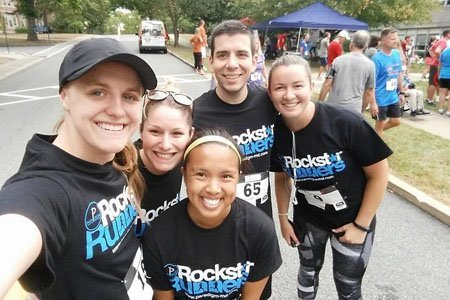 Paradigm hosted a team of runners for the ALS 5k! The fundraiser supported Scott Fleming and his family. Scott Fleming is a 48 yrs old local Morris County resident living with ALS. He was a member of the US Marine Corp Reserves and an active runner and triathlete before his diagnosis in June of 2013. Scott needs extensive modifications to his home to continue living there with his wife and 3 children as his ALS progresses. All proceeds from the race were used to help with these expenses.

Our dedicated team of runners included:

Toy Drive for Jersey Battered Women’s Services
Children’s Cancer Institute
Share
Return to top of page
Paradigm Marketing and Design Over the past 7 years, Paradigm Marketing and Design has evolved into a complete turnkey agency, but this award winning shop is still small enough to give clients the individual attention and hands-on, detail oriented services they need to be confident in their marketing effort and competitive in their industries.
330 Changebridge Rd. Suite #101 Pine Brook, NJ 07058, USA