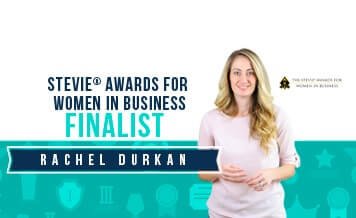 Mt. Tabor, N.J. – Paradigm Marketing & Design is pleased to announce that our founder and president, Rachel Durkan, was named a finalist in the Female Entrepreneur of the Year, Business Services, 10 or Less Employees category in the 15th Annual Stevie® Awards for Women in Business. As one of 13 nominees in the category, Durkan will learn next month whether she has been named a Gold, Silver, or Bronze Stevie Award winner.

The Stevie Awards for Women in Business honor women executives, entrepreneurs, employees and the companies they run – worldwide. The Stevie Awards have been hailed as the world’s premier business awards.

Gold, Silver and Bronze Stevie Award winners will be announced during a gala event at the Sheraton New York Times Square Hotel in New York on Friday, November 16. Nominated women executives and entrepreneurs from the U.S.A. and several other countries are expected to attend. The event will be broadcast on Livestream.

Durkan founded Paradigm upon the ideals of teamwork, collaboration and success. As President, she is responsible for the development of the agency’s long-term growth strategy and works each day toward cultivating a culture of entrepreneurship and ensuring that her team is able to uphold the company’s values: taking a vested interest in client success; supporting team members in all things; and striving for excellence in everything they do.

Over the last several years, Paradigm has earned several awards and distinctions, most notably the 2017 Small Business of the Year award, given by the Morris County Chamber of Commerce. Durkan has also been recognized personally as a 2017 Tribute to Women honoree by the Boy Scouts of America; a Top 25 Leading Women Entrepreneur for 2017; and a Top 40 Under 40 Marketing/Communications Professional by the NJ Ad Club.

“I am incredibly proud of the award-winning team we have built here at Paradigm,” Durkan says. “Our commitment to excellence speaks for itself, and I couldn’t be prouder. I have always believed in being a partner to my client, and my team has truly embraced that. We take our clients’ successes and challenges personally and generate amazing results to help our clients flourish. And it’s just as important to me that my team members are as happy as my clients. I want them to enjoy what they do so that the pride they bring to their work is carried over into our collective success.”

Finalists for the 15th Annual Stevie® Awards were determined by the average scores of more than 200 business professionals around the world, working on five juries. Their scores will also determine the Gold, Silver, and Bronze Stevie Award placements that will be revealed at the 15th annual awards dinner and presentations in New York.

“In its fifteenth year, the Stevie Awards for Women in Business received a record number of nominations. With the new Women|Future Conference preceding the announcement of winners on November 16, it will be a day to celebrate the achievements of working women around the world,” said Michael Gallagher, founder and president of the Stevie Awards. “We’re looking forward to recognizing the Stevie Award winners next month.”

About Paradigm Marketing and Design

Paradigm is a full-service marketing and design agency. Together with their clients, the team at Paradigm is focused on one objective: creating impactful initiatives that help their clients achieve long-term growth. Providing excellence is one of the agency’s core values, and they take tremendous pride in the quality of the work they deliver. Their cross-functional team approach ensures that they’re always working together to drive client success. For more information, visit www.paradigm-md.com.